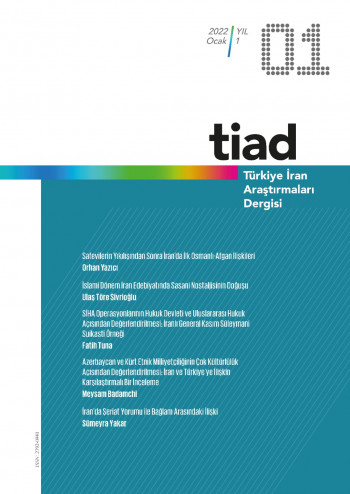 This study aims to reveal that Ottoman-Afghan relations claimed to have started with a letter by Ahmad Shah Durrani to Ottoman Sultan Mustafa III earlier in Iranian geography. The insurrection of the Afghan tribes residing in Kandahar under Safavid control at the turn of the 18th century changed the region’s history completely. Georgi Khan, appointed as governor of Kandahar by Shah Hussein in 1704, demonstrated severe administration on the region’s tribes, prompting the Ghilzai tribe’s chief, Mir Wais Khan, to revolt. The first Ottoman-Afghan relations started when Mir Wais was arrested and sent to Isfahan. In 1709, with special permission from Shah Hussein, Mir Wais went on pilgrimage and returned to Kandahar with a fatwa from the Hijaz Ulamas, establishing the first autonomous Afghan Emirate. The Ottoman Ulamas’ fatwa authorizing the Sunni people’s insurrection against Shiite Iran played a vital role in the foundation of this Emirate. With Mir Mahmud’s capture of Isfahan in 1722, Afghans became the eastern neighbors of the Ottomans. With Mir Ashraf’s ascension to the throne of Isfahan in 1725, Ottoman-Afghan relations deteriorated, Ottoman Empire suffered a heavy defeat in the Encidan War. However, Ottoman-Afghan relations remained via Kandahar when Nadir Shah Afshar terminated the Afghan rule in Isfahan. In this article, the first relations of the Ottomans with the Afghans through Mir Mahmud and Mir Ashraf, who established an independent emirate in Kandahar and captured Isfahan and established dominance there, were discussed using the archives, chronicles and travelogues of the period.

THE BORN OF SASSANID NOSTALGIA IN THE ISLAMIC IRANIAN LITERATURE

While nostalgia is a modern term, the longing for a lost and glorified past was undoubtedly available throughout the ages. In this respect, the Romans’ craving for the Augustus era, the Muslims’ longing for Asri Saadet or the Ottomans’ glorification of the Suleiman the Magnificent era can be described as “nostalgic”. The emphasis on nostalgic past for Iranian Muslims in the Middle Ages was primarily focused on the Sassanid past. During the early Islamic centuries, Iranian poets, writers, historians who wrote in Persian and Arabic took an attitude that glorified the Sasani past and belittled the Arab history. This attitude, some of which are reflections of the daily political climate of their era, appears as one of the reflections of the tension between Iranian and Arab Muslims, especially in the Abbasid Caliphate era. High-ranking Muslim Iranian bureaucracies have at times been accused of trying to restore the Sassanid dynasty. This accusation was also made against Shi’ite movements. On the other hand, it cannot be claimed that the Sasani heritage was owned only by Shi’ites or Iranians. In the development of Islamic civilization, the Sasani heritage has also influenced Muslim Arabs, especially in the geography called “Mashrik” countries. Although many studies have been carried out on the role of the Sassanid heritage in the development of the Islamic civilization, it has not been examined well enough whether Muslims have adopted this heritage with a nostalgic yearning or inherited by necessity. In this study, the approaches of the medieval Muslims to the Sasanian heritage have been examined by considering the nostalgia, trying to understand why Muslim Iranians and Arabs are interested in the Sasanian past and for what purposes they try to keep this heritage alive. This study aims to examine the efforts of Muslim Iranians who are stuck between Islamic religion and culture and Sasanian heritage to reconcile both cultural codes and the results of the tension they fell into during these efforts. In addition, it will also try to explain why the Muslim Iranians so persistently and vigorously defended their Sasanian heritage.
Keywords: Sasanids, Islamic Period, Persian, Literature, Muslim Iranians, Nostalgia.

EVALUATION OF UCAV OPERATIONS IN TERMS OF RULE OF LAW AND INTERNATIONAL LAW: THE CASE OF THE ASSASSINATION OF IRANIAN GENERAL QASEM SOLEIMANI

In recent years, with the gradual development of technology and progress in the defense industry, the security forces of many states have acquired unmanned aerial vehicles called UCAV’s. The use of UCAV technology has become even more preferred by states due to its various advantages such as minimizing personnel losses, reducing risk factors in counter-terrorism activities and cross-border operations, and quickly neutralizing targeted threats. UCAV technology, which is thought to reduce the risks in internal and external security operations and reach the determined targets effectively and efficiently, also brings various difficulties and risks. To calm the increasing unrest in their own public opinion after the human losses on the ground, some countries, notably the USA, preferred to carry out UCAV strikes instead of putting their own soldiers at risk in the operations they carried out in foreign countries, especially within the context of the “War on Terror” doctrine developed after the September 11 attacks. However, very few officials have information about the UCAV attacks so far due to reasons such as confidentiality, intelligence information, and national security. The fact that democratic institutions, parliaments, and the judiciary in the relevant countries cannot control and monitor UCAV operations raises questions about the legality of these operations. In this study, UCAV operations are evaluated in terms of the rule of law and international law, and the assassination of Qasem Soleimani, the Commander of the Quds Forces responsible for foreign operations of the Islamic Revolutionary Guards Corps, through a UCAV strike by the USA on January 3, 2020, is examined as a case study. In this research, it was concluded that Qassem Soleimani was assassinated in violation of international law.
Keywords: UCAV Operations, International Law, USA, Iran, Qasem Soleimani.

AZERBAIJANI AND KURDISH ETHNONATIONALISM WITHIN MULTICULTURAL PERSPECTIVE: A COMPARATIVE STUDY OF IRAN AND TURKEY

This article touches the relationship between the majority/center and minority/periphery in Iranian nationalism with a focus on the case of Azeri Turks in Iran. I will compare perspectives of multiculturalism in Iran and Turkey via a close reading of Kuzu’s Multiculturalism in Turkey: The Kurds and the State. In doing so I will also study the similarities between Azerbaijani and Kurdish ethnonationalism in Iran and Turkey via engaging in compatibility of the framework drawn by Kuzu to Iran. In his book Kuzu, the UK-based Turkish scholar of politics and multiculturalism, aims to explore the limitations of multicultural theory and practice when extended beyond the context of Western societies, particularly the cases of Belgium and Canada, into contexts such as Turkey. Kuzu does not reject multiculturalism in total, but offers an empirically grounded moderate form of multiculturalism. This model, one can argue, shifts between strong multiculturalism and civic/liberal nationalism, without necessarily being able to solve the possible contradictions between these two approaches. Kuzu’s work is much insightful for evaluating the situation of Azeri Turks and other nonPersian ethnic groups in Iran and their struggle for recognition through the contemporary era. My aim in this article is to pave the way to redefine historically rooted Iranian national identity on the basis of the conditions of ethnic pluralism and diversity in the post-Cold War era, and to propose a moderate solution to accommodate Azerbaijani ethnonationalism.
Keywords: Civic/Liberal Nationalism, Strong Multiculturalism, Ethnonationalism, Azeri Turks, Kurds.

The Islamic Republic of Iran presents itself as Islamic, first and foremost, regarding sharī‘a (Islamic law) which is theoretically the political and social centre of the state. The actual practices within the legal system reveal distinct interpretations and reflect individual understandings of Islamic law. The legal system and the interpretation of legal sources inevitably demonstrate influences from the social, political, cultural spheres. The first part of the article aims to identify how Islamic law is understood in Iran by referring to the interpretative methods of scholars in their respective jurisdictions. The critical description regarding the diversity of understanding Islamic law sheds lights on the connection between different interpretations and socio-cultural environment of Iran. This necessitates a brief exploration of Iran’s historical background which provides a detailed understanding of ideological and political influences. The main purpose of the second section is to offer a clear explanation regarding the process of adopting religio-governance theory in the current system of Iran to formulate solutions of governance in accordance with Islamic law. This section simultaneously provides knowledge regarding how religious education is pursued especially in Qom to instruct official scholars and to control the religious movements. The article gives a broad exploration of the connection between the educational background of scholars and legal methodologies which they are frequently applied to produce appropriate legal solutions and justifications.
Keywords: Shi’i Jurisprudence, Seminaries (hawza), Qom, Legal Reasoning (ijtihād), Context.

KHOMEINI, THE REVOLUTIONARY OF ISLAM, A BIOGRAPHY

This is the introduction to the German biographical review entitled Khomeini, Der Revolutionär Des Islam, Eine Biographie (2021) by Katajun Amirpur.