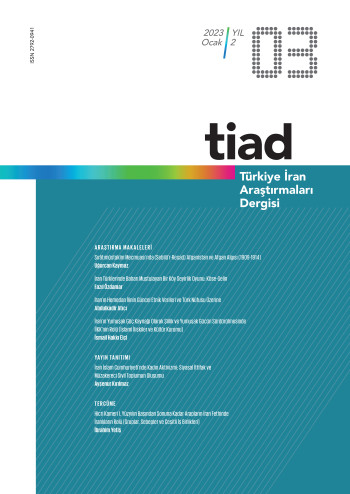 In the journal Sırâtımüstakîm (Sebilü’r-Reşad), one of the important publications of the Second Constitutional Era (1908-1922), many political, social and economic issues were discussed. In this article, the point of view of the journal and the writers on Afghanistan and the people of Afghanistan is discussed in the articles about Afghanistan. II. The spread of the Islamism policy, which was at its peak during the reign of Abdulhamid (1876-1909), also to the media organs, caused the articles discussed to focus on Islamic countries. One of the important representatives of the Islamic Union, Sırâtımüstakîm has become a journal containing these writings. Afghanistan, which has been trying to survive as an independent state in the middle of the Anglo- Russian struggle in South Asia for many years, was handled by Ottoman intellectuals in Sırat-ı Müstakim and evaluated within the framework of the situation they were in that day. Although the majority of the articles are about the political life of Afghanistan, the modernization efforts that started to achieve remarkable success during the reign of Habibullah Khan (1901-1919) also have an important place. It is seen that the writers who act with the thought of Islamism in political issues, study Afghanistan in comparison with other Islamic countries, see Afghanistan and Afghans as a part of the Islamic unity, and are in expectation of situations that benefit both the Ottoman Empire and Afghanistan. Especially in the period leading up to the First World War (1914-1918), Afghanistan, which was seen as a new front against the British in Asia, was always seen as a sister country where there was a magnificent development. In this article, Afghanistan and Afghans are discussed by making use of the copies of the aforementioned journal in the Islamic Studies Center digital archive and the transcription text of the journal published as a book.

Religions and political sovereignty have had an impact on the calendar choice of Turks, who have used various calendars based on the solar and lunar years from the past to the present. Currently, religious days and ceremonies of the Turkish communities that converted to Islam are based on the Islamic calendar, while different cultural celebrations take place according to the lunar year. The most well-known of these days is Nowruz. The Chelle Night can be seen as another day in this context, which is celebrated by not only Oghuz Turks but also others. As in the Big Chelle celebrated on December 21, there are also various ceremonies in the Small Chelle celebrated on January 29. The most well-known of these ceremonies is the Köse-Gelin play. Although the number of players varies in the Köse-Gelin play performed among Turks living in various regions of Iran, the play is mostly performed by six players named Köse (beardless), Gelin (bride), Drummer, Torbacı (a person who carries a sort of bag during the play), Dark Köse, and White Köse. This article discusses how and when this play, as a cultural transfer, is performed in addition to its purpose. It also examines the characteristics of the clothes worn in the performance of this play, in which the players win a pragmatic award, the content of the poems, and the symbolic meanings of the theatrical/dramatic roles. There are some functions of the play, in which the former year, which symbolizes winter, weakens and dies, and the arrival of the new year, which symbolizes fertility, is celebrated. When these functions are evaluated in the context of the functions of culture, it is seen that functions such as entertainment, supporting social values, education, transferring culture, and getting rid of pressure are important in the sustainability of this play. Also, this play is performed during the rainmaking ceremony and assumes a different function. Finally, like many other elements of oral culture, this play is significant for the preservation and transfer of the cultural identity of Iranian Turks to the future.

Except for hard power based on material power elements, soft power; It defines the attraction that a state creates in the international arena with its historical and cultural values and the benefit it derives from this attraction. Iran also effectively uses the soft power it has created through its historical and cultural heritage, and tries to maximize the benefit it has gained in the international arena thanks to this power. Iran bases a significant part of its soft power on the velayet-i faqih system and the sanctity it has created for itself in the eyes of Shiites, and thanks to this sanctity it has created, it gains great influence over the countries where Shiites live. Iran, which frequently uses its Shiite-centered soft power in its foreign policy in the Middle East, maintains its continuity with some institutions it has created. Islamic Culture and Relations Organization (ICRO) is one of the most important institutions established for this purpose. This institution, which currently has branches in Muslim countries, apart from the London branch; It promotes the historical and cultural values it has in these countries with the events, conferences and seminars it organizes, and tries to create an attraction for Iran or to break the bad perception created in the international arena, especially in Muslim countries. The aim of this article, which is about Shiism and ICRO as a soft power source; The aim is to examine the soft power that Iran obtained through Shiism and the Islamic Relations and Culture Institution that it established to ensure the continuity of this soft power. The main conclusion reached in the article; The belief in Shiism is an important source of soft power for Iran, and the continuity of this power is tried to be ensured by institutions such as ICRO. The historical-descriptive method was used in the article, within this framework; The subject has been tried to be discussed by giving both the historical and current situations of the sources on which Iran’s soft power is based.

WOMEN’S ACTIVISM IN THE ISLAMIC REPUBLIC OF IRAN: POLITICAL ALLIANCE AND THE FORMATION OF DELIBERATIVE CIVIL SOCIETY

It is a review of the book titled Women's Activism in the Republic of Iran: Political Alliance and the Deliberative Civil Society, written by Samira Ghoreishi in English.

THE ROLE OF IRANIANS IN THE CAPTURE OF IRAN BY ARABS UNTIL THE END OF FIRST CENTURY A.H (GROUPS, MOTIVES, KINDS OF COOPERATION)

Various theories have been brought up about the way of capturing Iran by Muslim Arabs and the fall of Sassanid Empire. The issue of how and why Arabs could deprive the great Sassanid Empire, and so they could dominate Iran in those times during almost one century is important, but the subject of the present study is the role of Iranians in the victory over Iran and their degree of cooperation with conquerors. Iranians cooperated with Arabs due to such motives as preserving properties, spirits and status, fearing and under compulsion. The Iranians ‘ cooperation with Arabs includes receiving news, reporting, receiving, military cooperation and so on. The era which is discussed in the present study begins with the first victories in the time of Abu- bakr, and continues until Yazdgerd death and the end of Theo first century A.H.