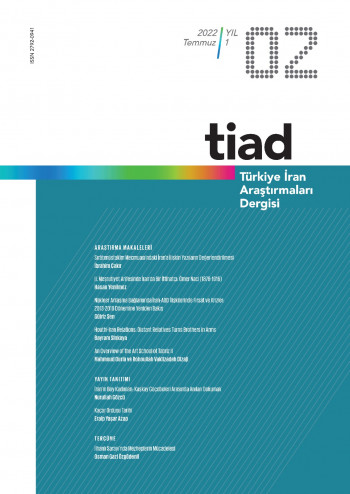 Many local and foreign authors wrote articles on different subjects in the Sırâtımüstakîm Magazine, which is one of the important publications published in Istanbul after the Second Constitutional Monarchy. One of these issues is the publications about Iran, one of the important geographies of the Islamic world. In this article, the place of Iran and Iranians in the Sirâtımüstakim Journal in the eyes of Ottoman intellectuals is discussed. The majority of the publications on Iranian history in the journal were written by Ahmed Ağaoğlu. In these publications, parts from the oldest periods of Iran to the Iranian Constitutional Monarchy are sometimes discussed in detail and sometimes superficially. So much so that while detailed information is given about the ancient times of Iran, there is almost no information about the Safavids, Afshars and Zends, who were influential dynasties in Iran for a long time. The 1906 Iranian Constitutional Monarchy, which took place close to the time of publication, and the events that took place after it were written by authors such as Mehmed Râgıb, Midhat Cemal and Hasan Nâci. With an agreement between Britain and Russia in 1907, Iran was divided into spheres of influence. The south of the country was left to England, and the north to Russia. After apportionment agreement, the Russians entered Iran and the Shah took some actions against the constitutionalism, and the events in the country were covered in the Ottoman press, and therefore in Sirâtımutakim.

A UNIONIST IN IRAN BEFORE THE SECOND CONSTITUTIONAL PERIOD: ÖMER NACİ (1878-1916)

At the beginning of the XXth century, the constitutional movements that followed one another in Russia, Iran and the Ottoman Empire, the three bordering states, witnessed the most remarkable political developments in the region at the beginning of the century. The important common denominator of these movements, which took place in Russia in 1905, in Iran in 1906, and finally in the Ottoman Empire in 1908, is that they fed and influenced from one another. For instance, in the opposition scripts written between 1906 and 1908, there are references are made to Russia and Iran -sometimes to Japan and China related to constitutionalism. In these references, it is observed that in the Ottoman Empire, who declared its constitutionalism the latest, these developments are viewed as a “lesson” to be learned. Although such interactions can be seen between the constitutional movements of all these three states, the constitutional movements in the Ottoman and Iran, whom by the way belong to the same religion, have much more common elements. One of these common elements is Ömer Naci, an important figure of the Committee of Union and Progress. Omer Naci stands out with his literary identity and orator. In this study, It will be revealed how Naci, who moved from Paris to organize the popular uprisings in Anatolia, especially in Erzurum, before the second Constitutional Monarchy, suddenly found himself in Iran and how he acted as a bridge between the two constitutional movements. The study also reveals these findings by focusing on his relationships with certain individuals and his activities in the regions. This text, which was built on Ömer Naci, will shed light on how the Unionists followed the constitutional movements in Iran on the eve of the second Constitutional Monarchy. Consequently, with the declaration of constitutionalism right (1906) before the second Constitutional Monarchy (1908), Iran, who followed the Ottomans of modernnization throughout the XIX. century, before a reference and in Naci’s word, “a fulcrum” for he Ottoman opponents, albeit for a short time.

This article aims to analyze the opportunities and crisis in Iran-US relations in the aftermath of the so-called Nuclear Deal (Joint Comprehensive Plan of Action-JCPOA) by revisiting the 2013-2018 period, which starts with Hassan Rouhani’s presidency culminating in intense diplomatic negotiations and agreement and ends with the US President Trump’s decision to withdraw from the deal. The article first attends to the confluence of domestic and external factors that made the JCPOA possible in 2015, then scrutinizes Tehran’s and Washington’s expectations from the deal and probes how and why these expectations were not fulfilled particularly with a focus on Iran’s perspective. In this context, it highlights the tensions between two countervailing positions within Iranian politics-the optimists and the skeptics- regarding the future of Iran-US ties and analyzes how historical animosity in conjunction with the US policies during the Obama and Trump periods have shaped power dynamics in Iran by employing process tracing and discourse analysis. The article argues that it was not plausible to expect the JCPOA to resolve the deep and multifaceted problems in Iran-US relations and this has never been the objective of the deal with its specific focus on Iran’s nuclear program, yet the post-2015 period shows that both Iran and the US had greater expectations from the JCPOA. Nevertheless, the relatively optimistic era of relations was over with the start of Trump’s presidency in 2017, as the traditional pattern of crisis and confrontation quickly resurfaced and bilateral and regional crises severely endangered the fate of the JCPOA. The trajectory of events effectively changed the domestic and external factors that once made the deal possible, and the disappointing experience of the post-deal period now shapes the difficulties of the Vienna Talks and Iran’s demands for a mutual return to the JCPOA.

Revolutionary process in Yemen that begun in February 2011 ended up with the Houthi movement’s (that is also called Ansarollah) takeover of Sanaa, the capital city, on September 21, 2014. The takeover has drawn attention to Houthis’ ties with Iran and unleashed a debate on whether the Houthi movement is a new proxy of Tehran. Likewise, subsequent military intervention of Saudi-led international coalition to reverse the Houthis march to power is also discussed within the framework of a proxy war between Riyad and Tehran. However, the frame of proxy relationship leads to the underestimation of multi-layered, intersected confrontations among a multitude of actors, and changing characteristics of the protracted conflict. Indeed, the conflict in Yemen has evolved from the Houthi uprising to a prolonged civil war that drew leading regional powers and had regional ramifications. The Houthis also turned from local insurgents to national actors, and to virtually regional players. Unfolding of the Yemeni conflict from a local insurgency to a protractive regional conflict has also transformed the Houthis’ relations with Tehran. This article aimed at elaborating the Houthis’ changing relations with Iran over the course of time. It is argued that initially there was a distant relationship between the Houthis and Iran, which evolved in two decades into a close relationship of “brothers in arms”.

Safavid dynasty was established in Azerbaijani regions (Northwest of Iran) based on a powerful military (Qizilbash) that made it possible to unify other parts of Persia, Caucasia, some parts of the Peninsula, and Anatolia. Safavids defined the meaning of unified Shi’ite Iran. They mixed Arabic Shi’ite ideology with the Persian language to be distinguished from other Turkish Sunni empires (Ottomans in West and Mughals in East). Safavids developed their idea and rules by flourishing artistic pieces, especially poetry, painting, and architecture. The Art School of Tabriz II is the best example that mixed them using oriental techniques. Descriptive comparison and qualitative research methods were used in this paper to show the roots and features of this school. The painting and architectural masterworks are illustrated to show their features and interrelations. Finally, it is shown that this school was not only a mixture of Persian, Azerbaijani, and Arabic cultures but also, it combined ideological concepts with naturalism and realism. The miniatures were used as a sketch for architecture, and the paintings are affected by architectural spaces. In terms of calligraphy, most of the texts are written by Nastaliq in this school with special rules presenting modular design.

It is the book review of the study titled Tribeswoman of Iran Weaving Memories among Qashqa'i Nomads written in English by Julia Huang.

HISTORY OF THE QAJAR ARMY

It is the book review of the Persian study titled Tarih-i Kosun-ı Kacariye written by Darius Shahbazi.

In his book Die Mongolen in Iran Bertold Spuler states that “we do not know how much the activity of Oljaitu made the spreading of the Shia sect in Iran possible”. The purpose of this short article is to evaluate this statement. The conversion of the Ilkhanids to any of the Moslem religious sects was due to the efforts of court rivals. Oljaitu grew up among the Hanafi Sunnis but when he came to power in 1304 his influential Grand Viziers were Shafi’i and Shi’i. This led to great rivalry between the Hanafi, Shafi’i and Shi’i sects. As described by Abu’l-Qāsim Kāshānī, the fanatic Shi’i Tāj al-Dīn Āwajī, who was an assistant of the Vizier Saʻd al-Dīn Sāwajī, was ultimately the most successful and Oljaitu converted to Shi’ism resulting in the revision of Friday prayers and the changing of coinage. However these changes were largely superficial and in the Sunni areas of Iran these changes were resisted during Oljaitu’s lifetime. There is evidence that after the execution of Saʻd al-Dīn Sāwajī and Tāj al-Dīn Āwajī the enthusiasm of the Ilkhanids for Shi’ism began to wane and Oljaitu came to regret his conversion. Shi’ism in Iran went into decline after Oljaitu’s death.